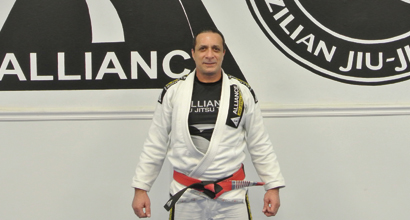 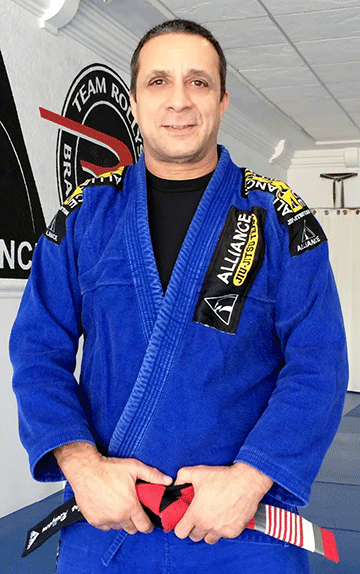 Carlos Rollyson, was born in Teresópolis, Brazil, a small city 45 minutes outside of Rio de Janeiro. He has now found a new home in South Florida; where he has been teaching at his Hollywood gym since 2007.

Introduced to Jiu-Jitsu at the age of 7, Carlos began training basic self-defense with at home with his father. At the age of 10 Carlos started his formal training with Grandmaster Carlson Gracie Sr., who had his first school in Teresópolis and later in Copacabana. In conjunction with his Jiu-Jitsu training, Carlos wanted to expand his knowledge and skills further by also training Judo; which he started at the age of 12, with Takise Ueda, a 7th dan Master.

Although training both Jiu-Jitsu and Judo at the same time was not easy, his determination and dedication paid off. In 1980, at the age of 18 Carlos achieved the rank of Black Belt in Judo; 2 years later, he attained his Black Belt in Brazilian Jiu-Jitsu from Carlson Gracie.

Carlos open his first school, in Brazil, at the age of 18, while he was still a purple belt, and since then he has taught in schools throughout Brazil and South Florida. Since coming to the States Carlos has taught in various schools, his skills have become widely recognized; not only by those attending his class, but by the DEA and FBI. Carlos has been contracted to hold seminars for DEA and FBI agents of Miami, as well as local Law Enforcement. He taught them skills and techniques that would later help them better protect themselves in the field.

Carlos has won numerous competitions in Brazil. In 1993 he was the Brazilian National Champion and State Champion (Rio de Janeiro). His most prominent win came in 1994 at the Brazilian National Competition where he defeated both Rolker Gracie and Eduardo Mano to win the Gold.
After the death of his Master, Carlson Gracie Sr., Carlos continued to remain active in the sport. But knowing that Jiu- Jitsu is constantly evolving, he no longer wanted to remain unaided, and craved the support of a unified team. Not long after his decision to seek out the aid of his peers, Carlos began his relationship with Alliance Jiu-Jitsu, 7 time IBJJF World Team Champions. Being a part of the strongest teams in the Jiu-Jitsu world has renewed his passion for Jiu-Jitsu; it has expanded his criteria and arsenal of attacks and defenses, all of which he passes on to his students.
Although many instructors use the name “Master,” it is not always a true statement; Master is more than just a name, it is the continuous time put in to the sport. After 44 years of training Jiu-Jitsu, and 31 years as a Black Belt, Carlos was presented with his 7th Degree Coral Belt (Red and Black Belt) from the International Brazilian Jiu-Jitsu Federation in 2012; he one of less than 10 true Masters that teach here in the United States.

He has now been blessed with the opportunity to open his own school here in Hollywood, and would like to extend an invitation for you to come join our team. Experience for yourself the knowledge and skill that Carlos extends to all of his Jiu-Jitsu students.[/three_fourth_last]

Sign up to try a week of Classes, absolutely FREE!